Difference between revisions of "SCRABBLE History"

An earlier version of this history of our Scrabble game appeared on the NSA's website until 2009.

Even though it’s a word game, the real story behind Scrabble is numbers. One hundred million sets sold world-wide. Between one and two million sold each year in North America. And, of keen interest to legions of passionate players, over 120,000 words that may be used in their scoring arsenal. 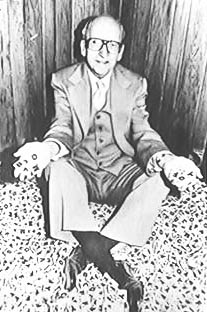 The story of the game’s evolution from underground craze to cultural icon is as American as, well, the Scrabble game. Alfred Mosher Butts, an out-of-work architect from Poughkeepsie, New York, decided to invent a board game. Analyzing games, he found they fell into three categories: number games, such as dice and bingo; move games, such as chess and checkers and word games, such as anagrams. Attempting to create a game that would use both chance and skill, Butts combined features of anagrams and the crossword puzzle. First called LEXIKO, the game was later called CRISS CROSS WORDS. To decide on letter distribution, Butts studied the front page of The New York Times and did painstaking calculations of letter frequency. His basic cryptographic analysis of our language and his original tile distribution have remained valid for almost three generations and billions of games played.

Established game manufacturers were unanimous in rejecting Butts’ invention for commercial development. Then Butts met James Brunot, a game-loving entrepreneur who became enamored of the concept. Together, they made some refinements on rules and design and, most importantly, came up with the name "SCRABBLE," a real word which means "to grope frantically." The game was trademarked SCRABBLE Brand Crossword Game in 1948. The Brunots rented an abandoned schoolhouse in Dodgington, Connecticut, where with friends they turned out 12 games an hour, stamping letters on wooden tiles one at a time. Later, boards, boxes and tiles were made elsewhere and sent to the factory for assembly and shipping. 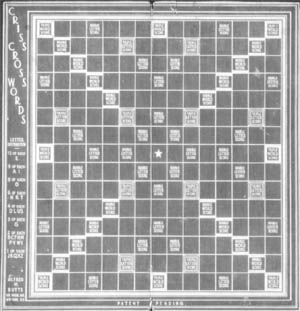 The first four years were a struggle. In 1949 the Brunots made 2,400 sets and lost $450. As so often happens in the game business, the game gained slow but steady popularity among a comparative handful of consumers. Then in the early 1950s, as legend has it, the president of MACY’S discovered the game on vacation and ordered some for his store. Within a year, everyone "had to have one" to the point that Scrabble games were being rationed to stores around the country.

In 1952, the Brunots realized they could no longer make the games fast enough to meet the growing interest. They licensed Long Island-based Selchow & Righter Company, a well-known game manufacturer founded in 1867, to market and distribute the games in the United States and Canada.

Even Selchow & Righter had to step up production to meet the overwhelming demand for the game. As stories about it appeared in national newspapers, magazines and on television, it seemed that everybody had to have a set immediately. In 1972, Selchow & Righter purchased the trademark from Brunot, thereby giving the company the exclusive rights to all SCRABBLE Brand products and entertainment services in the United States and Canada.

In 1986, Selchow & Righter was sold to COLECO Industries, who had become famous as the manufacturers of the Cabbage Patch Dolls. Three years later, COLECO declared bankruptcy, and its primary assets — most notably the SCRABBLE game and Parchesi — were purchased by Hasbro, Inc., owner of Milton Bradley Company, the nation’s leading game company.

Today the game is found in one of every three American homes, ranging from a Junior edition to a CD-ROM with many versions in between including: Standard, Deluxe with turntable, Deluxe Travel, Spanish and French.

Competitive Scrabble game play is widely popular much in the manner of chess and bridge. Every year, the NASPA Championship is held in a major US city, and a world championship takes place in a different country. In addition, NASPA sanctions over 400 tournaments and 200 clubs in the United States and Canada.

The next generation of Scrabble players is steadily growing with over a half million kids playing the game in more than 18,000 schools nationwide through Youth Scrabble programs. Hundreds of these students currently compete in state and regional championships across the country. The first annual National School SCRABBLE Championship was held in Boston on April 26, 2003.

Alfred Mosher Butts enjoyed playing the Scrabble game with family and friends to the end of his life. He passed away in April 1993 at the age of 93